So here is the finished mini wedding ring pillow! Please follow my other IG account @eleanor_grace_uk for more of my new business, I will share some bits here, but mainly cats and stuff! My Etsy shop is https://www.etsy.com/uk/shop/EleanorGraceUK
Happy Easter! Hope you are all enjoying time with friends and family. Here in Wiltshire it is so sunny! Love this shot, inadvertently taken of my parents, at the marvellous Courts Garden in Holt. Beautiful National Trust garden. and the cream teas are ace! #NationalTrust #creamtea #family #HappyEaster #gardentime #happydays #chillout
Enjoying a relaxing long weekend with a new project to design! I so enjoy this part of the process, after sourcing vintage pearls, pretty lace and ivory satin, to sit down and work out how it will all fit together... Finished piece to come later! #wedding #weddingaccessories #mywedding #weddingmaker #shoplocal #shopsmall #artisan #makersgonnamake
Been busy working on my new business, Eleanor Grace. Have spent weeks scouting for vintage fabrics, ribbons, pearls, and the best lace and satin fabrics, silk and cashmere yarns. Follow my journey at @eleanor_grace_uk
Looking after my friend and neighbour's cat, Brian, he is totally out of his mind on catnip drops! #mentalist #catsofinstagram #cats #mentalcats #kittylove #whataface
This has taken me far too long to applique onto a cotton t-shirt, all for a bit of fun, more to be revealed tomorrow! #random #flashgordon #geek #saviouroftheuniverse
Follow Chester Bunnynuts on WordPress.com

I had great fun this weekend, giving some cheeky little presents which I had made, to my lovely friends, Kerry, Des and Tilly, who I haven’t seen for ages…

I decided to be quite adventurous and make Des a crocheted Death Star – that evil Star Wars space station – thanks to the amazing pattern from Pops de Milk – I was quite pleased how well it came out, and I may just have enough yarn to make myself one as well.  I didn’t half get some funny looks on the train when I was finishing the stitching! 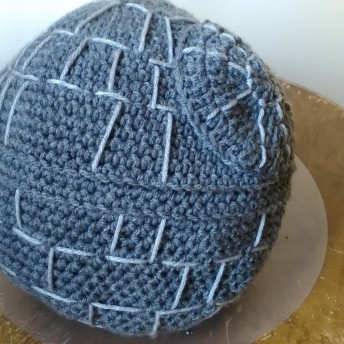 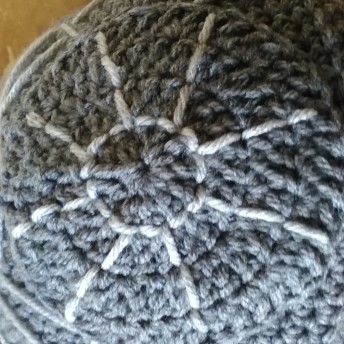 Next up is Kerry – who, not exclusively within their household, has an unnatural love of trumping (farting, blowing-off, passing wind, whatever you wish to call it!)

I found an old book of cross-stitch alphabets and decided to use one of the most pretty designs with one of the rudest sentiments.  A nice juxtaposition…

Finally, Tilly is apparently obsessed by Adventure Time – an animation series I have never seen, and she particularly likes two characters, Jake and Finn.  I meant to make both figures but Jake took so long I had to stop there!  Perhaps on my next visit she will have a matching pair…

You would not believe how difficult it is to make a figure which you are unfamiliar with, especially when he has a surprising number of ‘parts’ (not being rude there, for once!).

All of the prezzies were happily received and gave me the chance to practice some skills I haven’t used for many years, I may have to make some more subversive pieces for my own amusement…  Or maybe even on my Etsy shop.

What phrases (cheeky or not!) would you like to see hanging on your walls?

I visited a couple of years ago (during Matt Smith’s Doctor) and they have recently re-energised it and the exhibition with a more interactive Peter Capaldi episode which is at times quite spooky, but very enjoyable.

Afterwards we wandered through the exhibition and bought some goodies at the shop.  More on that later – I thought I would start with the costumes which were quite magnificent.  Please excuse the quality of the pictures as I only had my mobile phone camera on hand…

Firstly, some of Clara’s costumes.  She’s not my my favourite of companions, although she has her moments…  She is so incredibly tiny – I am sure my biceps are wider than her waist! 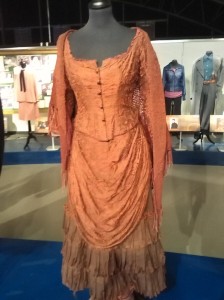 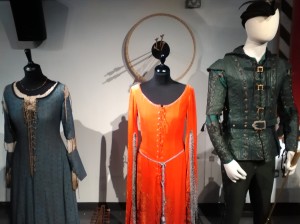 On to one of my favourites, River Song.  She is an amazingly powerful female character.  One of the things I love about Doctor Who is that they don’t just write in two-dimensional girlie roles.  All of the companions (and now Missy of course!) are complex, usually clever, resourceful and funny.  River Song had (or should we say, has!) this in spades. 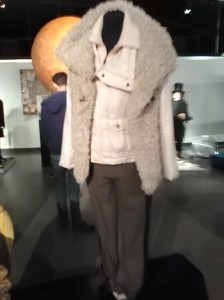 On to some of the character costumes – the attention to detail and styling on these were quite astounding up close and personal. 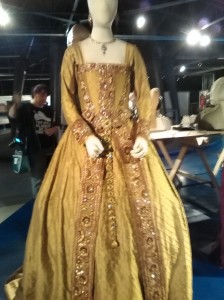 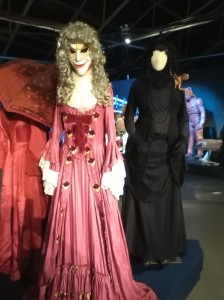 I can’t do a blog on Doctor Who costumes without including The Doctor himself.  Firstly – my first Doctors.  I have no recollection of Jon Pertwee, I think I would have quite enjoyed his incarnation of The Doctor.  The Fourth Doctor, Tom Baker, was my first Doctor.  I found him extremely scary at the time – big eyes, big hair, very tall and that booming voice (well I was very young!)

As a keen knitter and crocheter, I have always fancied making a scarf or two, based on a variation of Tom Baker’s scarf.  Perhaps one in a thinner, lighter fabric, not so wide and certainly as long as possible – but maybe not quite the 24 feet long scarf that the Fourth Doctor had at one point.

Peter Davison was my favourite at the time, he was quieter, more sensitive and, of course, very handsome!  The celery stalk was a bit of a strange addition to the costume, but it all added to the quirkiness of The Doctor which we all know and love…

So here they all are – in order, including the War Doctor. 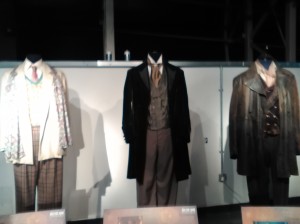 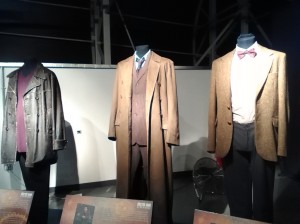 My least favourite Doctor was Sylvester McCoy.  He had some fun with the part, but it was no surprise to me that the series was cancelled at that point.

With ‘new Who’ I was thrilled that Christopher Eccleston took the part of The Doctor.  He and Russell T. Davies brought something fresh and new to a character that we all loved, and thought we knew!  but my Doctor is (and probably always will be) Ten – David Tennant (he really was a skinny boy!)

He just encapsulated the role so brilliantly and could play light and shade and everything inbetween.  Although Eccleston brought it back in style, to my mind, it was Tennant and his relationship with Rose that sealed the success that it now is.

Who is your favourite Doctor and why?

It’s a fine excuse to spend a lazy weekend at home with nothing much planned apart from crafting and geeking out.

This fantastic book has just popped through the door (thank you Amazon!) and I’m really excited to start some geeky new projects.  I have had a few ideas in my mind for a while, but have now been sidetracked by the fantastic Princess Leia hair buns hat and Padme Battle Cape sported by the model on the front cover!

OK – so they’re not practical (can I see myself wearing either to work?) but there are some really fun projects.  I surprised myself at my lack of geeky knowledge of the books / films in this – I’m not particularly keen on comics (I tend to think that’s more of a boy thing) and most Fantasy is not really my bag, but I love a bit of Sci-Fi…

With the cold weather and my general laziness this weekend I have decided though to spend some time researching the two geeky gifts I want to make next (one of which is for myself!)

Firstly, since I started knitting two years ago, I wanted to make myself a Tom Baker-style scarf.  Yes – for the uninitiated I’m talking about Doctor Who.  Tom Baker was my first Doctor (I came in on the very end of his reign) and although I found him quite frightening in many ways (particularly the hair and teeth) – I always loved his scarves.

What I’d like to do though is a finer version – just as long but using finer wool (perhaps DK or Aran).  I love this idea which I found on Pinterest…

This is actually made from beads – it’s really gorgeous.  Perhaps rather than a DK / Aran one I’ll make one in lace / 4ply.  That would be a bit more complex methinks…

I have also found this wonderful pattern for a Death Star by the brilliant Pops de Milk – this is so mega-cute that I think I’ll make one for me and one for a friend, who I hope will love it.  He’s even geekier than me, so no doubt he will be impressed!

But for this weekend, I’m going to stick to a Star Wars day today (original trilogy of course) and then tomorrow I may be Star Trekking (yes, geek fans I may be letting you down by admitting I prefer the J.J. Abrams reboot to any previous Star Treks)  And now he’s in charge of Star Wars.  I may be just a little excited about that…